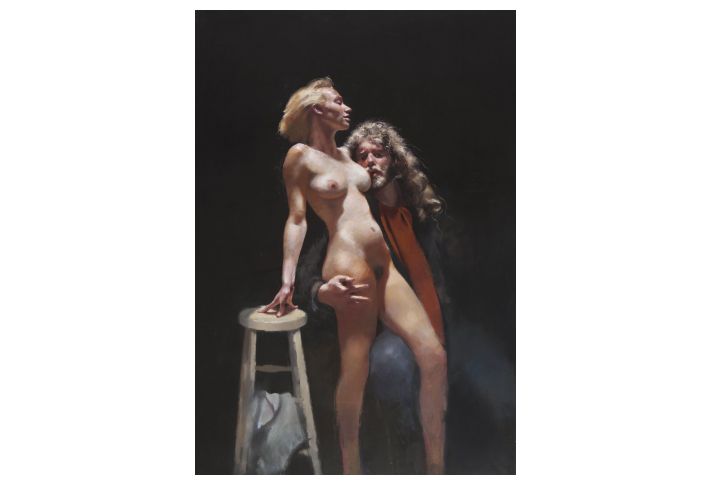 The Carità Romana (Roman Charity) formula derives from Roman mythology and relates the story of a devoted daughter, Pero, visiting her incarcerated father, Cimon, and breastfeeding him to prevent starvation – an exemplary tale of filial duty and charity. In Peter Paul Rubens’ c.1612 treatment of the theme, Pero is dressed in a white blouse and red skirt, a colour combination of which Lenkiewicz made frequent use in other paintings for Project 18. Lenkiewicz himself now habitually appeared in the paintings with a red scarf – the red colour with its traditional associations with passion and desire being a metaphor for St Antony’s lustful temptations.

Many of the sitters for Project 18 were amateur models, friends and associates of the artist, painting students, or studio regulars like his secretary and assistant, Patti Avery. But the scale and ambition of the Project obliged Lenkiewicz to break with his usual practice and recruit paid models. The ability of a professional model like Samantha to hold poses under muscular tension for protracted periods of time inspired the painter:

It also inspired photographer Dr Philip Stokes, who had long enjoyed privileged access to the painter’s studio as he worked on a pictorial biography of the artist – he came to one of the early sittings for this painting and photographed artist with model. The high tones of the model’s skin under a powerful top-light proved technically challenging for the photographer. Stokes recorded that: “The pose was not wildly contorted, indeed seemed almost restful, but Samantha assured me it was most difficult to hold, especially in view of the load on her right arm, and frequent rests were needed.”

The Painter with Samantha.
Project: The Painter With Women: Observations on the Theme of the Double
Medium: Oil on canvas
Size: 186 x 128 cm

Anna in the Garden at Lower Compton.

St Antony in the Desert Playing with Demon.

The Painter with Benedikte.

The Painter with Janine Pecorini.

The Painter with Karen.

The Painter with Lisa Stokes.

The Painter with Mary.

The Painter with Monca and Reuben.

The Painter with Patti Avery.