The Sexual Behaviour Project was another sociological survey and took a straightforward encyclopaedic approach to the predilections of the sitters. It was notable in its engagement with the lesbian and gay community, particularly in the large group portrait Mr Harry’s Club, a haunting record of lives taken by HIV. The Project was shown in 1983 in the upper floors of the warehouse which had now been annexed to the painter’s Barbican studio.

“Local Authority regard this project as unsuitable for those under eighteen. This is not the painter’s opinion.”

According to Lenkiewicz the police were especially provoked by the entire sub-section on prostitution and the baroquely framed tondo The Painter Rutting with a Goat. This sensational image was a pun on Lenkiewicz’s birth sign, Capricorn, and the goat mascot of Plymouth Dockyard, the naval base which Lenkiewicz viewed as one of the “twin crutches between which Plymouth limps along”, the other being Methodism. The painting was a pastiche of a Joseph Nollekens satyr sculpture in the British Museum collection, a provenance Lenkiewicz used to defend against the threat of prosecution under obscenity laws.

The local reaction to the project was of far greater interest and stimulation in Lenkiewicz’s view than the Project itself and much more revelatory.

… The Project attempted to demonstrate that there was no end to human creativity; that loneliness combined with human passion could animate a hoover to far more gratifying potentials than one’s wife. The Project seemed to indicate that all sexual behaviour was auto-erotic; from marriage partners to strangers’ underwear. It seemed an inherent and terrible isolation lay just under the surface of some of the most powerful desires to consult with and connect to the world around us. Auto-erotic activity finds itself its own reward, such as it is. It has little to do with the subtler aspects of human relation­ships and claims for the credibility of ‘the other’.

Note: This painting Mr Harry's Club was destroyed in June 2012 in a fire at the property of the collector who owned it. It was last exhibited at the Royal West of England Academy in 2011. 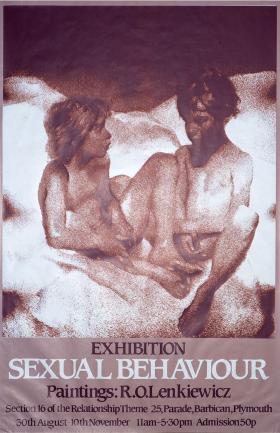