When, in 1974, Lenkiewicz elected to study the relationship between the sexes he eschewed the contemporary language of feminism or gender relations and turned instead to a medieval tradition. Church frescoes depicting the dead in dialogue with the living were commonplace as memento mori and encouragements to timely penitence in the fifteenth century. But the Danse Macabre or the Totentanz tradition flows out of the catastrophic depredations of the Black Death. The Dance of Death imagery is typified by woodcuts, such as those by Hans Holbein the Younger (c.1497–1543), showing energetic skeletons dancing spryly at the gravesides of the recently deceased or linking hands in round-dances with nobles or peasantry alike; Death as the great leveller.

An intense aesthetic/personality interest in another person seems always to carry with it the inevitability of change. In this change we witness the death of love and the decay of our interest. The undermining influence of this experience, hints at the contact between ‘Death and the Maiden’ – between ‘Love and Tragedy’ – between life and us. (D&M, 1974)

The ‘Death and The Maiden’ theme is most familiar through the Romantic Schubertian treatment in his string quartet in D Minor of 1824, though Lenkiewicz noted that "Schubert’s Death is merely a kindly but implacable ‘doing-his-job’ policeman chasing the Maiden [Life]. Perhaps he was entirely unaware of the sado-masochistic undertones generally conceded in the theme." Lenkiewicz had in mind an earlier tradition, typified by the imagery of Albrecht Dürer and his protégé Hans Baldung Grien (c.1484–1545), which is altogether more profane and disturbing.

Baldung Grien’s ‘Death & The Maiden’ themes may be seen to represent the decay of love. As the rotting corpse has to be buried and to disappear forever, so the Maiden dispels unsatisfactory love. The corpse of passion — decayed and futile – is reviled at the brink of the grave. (1974)

Images of Death portrayed as a skeleton assaulting The Maiden flow directly from The Dance of Death theme but are tinged with the misogynistic fifteenth century loathing of women which gave rise to the witch burning craze.

…the idea of the male skeleton physically assaulting a live woman, taking her to the edge of the grave and actually sexually assaulting her on the edge of it, were vibrant images and very violent. They dealt with male domination and they smacked of the same kind of fanaticism that one sensed in the Malleus Maleficarum [Hammer of Witches] by Kramer and Sprenger and the witchcraft phenomenon, which can be seen nowadays as the history of male violence against women. (1997)

In the larger canvasses, Robert used another metaphor from fifteenth century woodcuts and paintings — that of Death’s entrails spilling from his abdomen in a parody of pregnancy. The Notes on Death and the Maiden state "this decomposing woman was designed to bear children, but the contents of her stomach reveal only the destiny of birth…" and many of the smaller works include a pietà theme of a young mother nursing her child, with a skeletal Death intruding into the embrace or lurking in close proximity as the inevitable negation of the new life just beginning. Another image shows Death embracing a woman from behind but as if unnoticed, for

Death is the archetypal flirt. He will touch her here and touch there – always from the rear – for he is an unloved lover. Licentiousness alone is capable of contact with 'the old gentleman'. Through wanton and sacrificial behaviour, the very edge of life is sensed. Oblivion is replaced by the orgasm…

The phenomenon of orgasm, the “little death” as it is sometimes known, would be dealt with in a later Project:

…that excitement is death-like, the feeling of losing control, being swept off one’s feet, the swoon. ‘I die because I cannot die’, says St. Theresa. …[Her] remark describes orgasm far more effectively than Bernini’s Vatican statue. 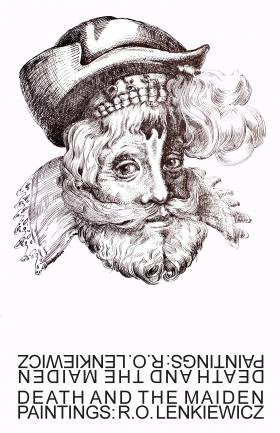 Three Magi presenting their entrails to the Virgin & child [the world]
1972
Watercolour and ink.