Orgasm, Section Nine of the Relationship Series, shown in 1978:

Orgasm places some part of our consciousness on a tangent to the rest of it; like a Möbius strip, the circle appears to have two sides, but in fact it has only one.  It is said that we ‘love’ in order to defend ourselves from beauty. We cannot escape our pri­vate aesthetic, so we drown in it. (1978)

The Jealousy and Orgasm Projects are linked by the imagery of viscera, of entrails grasped possessively, or consumed in acts of quasi-cannibalism, or 'drawn out' in an echo of medieval torture by departing lovers:

I was engrossed by the notion that when lovers embraced each other what they really wanted to do was to pass their arms through each other, not round each other; they wanted to make holes and get a good grip, and this was in order to compensate for the fact that no matter how much you press, say, your fingers together, they’re separate – it doesn’t matter how intense the embrace is, you’re separate.

The 1997 Retrospective notes expand on this:

Orgasm, sometimes referred to as ‘The Little Death’, crosses boundaries without a heart. The sexual channels are also the body’s sewers. There are unmistakable links between excreta, decay and sexu­ality. Life can be seen as instability and disequilibrium exhausting its own resources. It proceeds on one condition; the extravagant procedure of things given life, making room for fresh cycles. Lenkiewicz notes:

“... that excitement is death-like, the feeling of losing control, being swept off one’s feet, the swoon. 'I die because I cannot die’, says St. Theresa. …[Her] remark describes orgasm far more effectively than Bernini’s Vatican statue."

In earlier cultures than our own the horror of carrion or decomposition linked in a Faustian style with punishment for pleasure. Decomposition was a sign of failure, the underlying meaning of the macabre. Baroque Theatre staged its love scenes in tombs. The sexual act, like death, could be seen as a transgression separating us from daily life, from rational society, work, etc.; plunging us into a violent otherness. A dictator­ship controls the body. The genitalia act on behalf of the whole organism. Orgasm as the relief of tension is a revolution, anarchic and dangerous to the order of the body politic. What we desire to possess we fear to lose. The body is never static, it is an energy system whose ‘reality’ does not consist of substances, but of events. These events are aesthetic in their nature. Whatever attraction directs our energy is strangely cannibalistic. What we desire is incorporated – seeing is eating. 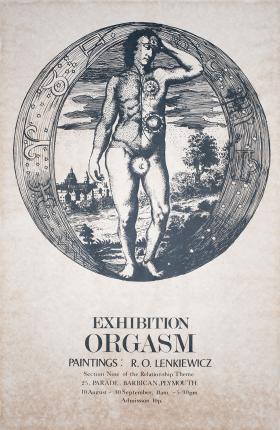