In the Suicide Project Lenkiewicz put forward the thesis that suicide was in reality “murder through mistaken identity”, where the aim of the suicide was not personal extinction but rather the annihilation of the surrounding world, which had grown intolerable. Lenkiewicz’s purpose in the Project was to explore the personal compromises and social environment that rendered the living aesthetically or creatively dead. Hence, Lenkiewicz saw many social activities as conspiracies undetaken by the indivdual against themselves, rendering them “dead whilst still alive”:

I don’t see the business of family, generally speaking, as one of power and authority. I see it as one of suicide, one of self-negation, the consequence of terror and fear of isolation … The family exists precisely because one does not wish to be creative. It is a means by which one can appear to render one’s life significant, appear to give oneself overall responsibilities which are, I think, false responsibilities. (Philip Stokes Journals, Vol.2 1984)

Lenkiewicz concurred with the views expressed in Al Alvarez’s book, The Savage God: a Study of Suicide (1972), that unhappy, unfulfilled, non-creative lives were a kind of suicide by increments. As Lenkiewicz put it

… suicide as we recognise it, the arranging and achieving one’s personal extinction, was only the tail-end of a whole lifetime of suicides, of placing oneself in situations where one kills some aspect or another of one’s hopes and intentions.

The notes for the 1997 Retrospective state:

… a number of images in this Project relate to the misery people inflict upon each other in short or long term relationships. Depression locks its sufferer into a cage which one can neither see out of nor into. It is, in a sense, the psychic equi­valent of black holes in space. Great pain leads to silence. Except for suicide, silence is the most extreme form of revolt. As Kierkegaard has observed, whether one does or does not think about despair one musters:

“… everything to re-explain and explain away entrance and exit, simply lost in the interval between the birth-cry … and the death-struggle.” 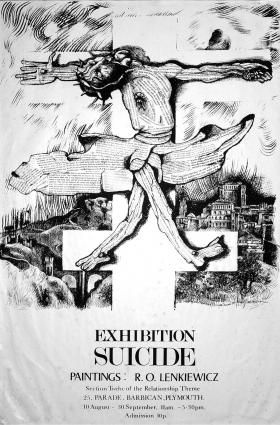