On 11 February 1982 an article appeared in The Western Evening Herald called The Changing Pattern of Dying. The article began:

To make the kind of request that lies at the heart of this article may seem eccentric. In the light of a number of my past themes and activities, asking a dying person to come forward willingly to sit for a painting and discuss their feelings is skating a little close to the unacceptable. (Lenkiewicz 1982)

That request was for anyone ‘dying maturely’ to pose for a painting for the artist’s forthcoming Project (his fifteenth) on theme of Death. Lenkiewicz’s article traced the major shifts in Western culture in attitudes towards death:

A thousand years ago the death experience was expressed in poetry and literature as the ‘sense of life ebbing away’. It was something very simple, a feeling on a natural level that pervaded the ages …. Death was a ritual organised by the dying person himself. (Lenkiewicz 1982)

But in the fifteenth and sixteenth centuries, the deathbed scene was gate crashed by the supernatural retinue of The Last Judgment, as shown in:

… countless paintings of what are called ‘artes moriendi’, The Art of Dying. In these booklets we see the room invaded by a hoard of supernatural beings. Christ, the Trinity, the Virgin, the whole Celestial Court, on the one side of the bed -- Satan and a monstrous army of demons on the other; a brutal pressure of anxiety barging into the sick room like the Mafia. But it still left the dying man in touch with himself, even if he did make his Will over to the church to ensure a closer burial to the altar. (Lenkiewicz 1982)

But what of his own times? What did Lenkiewicz see as the state of play regarding death in the early 1980s?

After so many centuries of death familiarity and confrontation, and in such fascinating and tireless variation, we are now witness and contributors to an extraordinary event. Death is being effaced, disappearing. …. Death is shameful and forbidden. It began surreptitiously enough: those surrounding the dying person had a tendency to ‘spare’ him, to hide from him the ‘gravity’ of his condition. The truth was being interfered with. But this sentiment (highly suspect in itself) was rapidly replaced by an urgent need to avoid -- no longer for the sake of the dying person, but for society’s sake, for the sake of those close to the dying person -- the fact of death; the ugliness of death. (Lenkiewicz 1982)

Lenkiewicz exhibited his paintings and research notes on the theme of Death between October and December 1982. The exhibition was the final part of what can be seen as a trilogy of investigations into the problem of mortality. The first part, Old Age, was shown in 1979 and was followed by Suicide in 1980.

Sitters for the Death Project included the City coroner, doctors, surgeons and a number of local clergy, all of whom would have been aware of Lenkiewicz’s provocative thesis regarding the ‘death industry’.

Once the hospital had been a shelter for the poor, for pilgrims: it became a centre for healing. It still has a curative function, but it is also a designated spot for dying. One goes to the hospital for the specific purpose of dying. More than 70% of people die in hospital, three quarters of them alone. …. In the 19th century a sentimental pattern caused the initiative to pass from the dying man to his family. Today the initiative has passed from the family (as much an outsider as the dying person) to the hospital team. They are the masters of death. It is they who obtain from their patient an ‘acceptable’ death; that is, a death that can be tolerated by the survivors. (Lenkiewicz 1982)

The large group portrait titled Mr Earl Senior, of Earl of Plymouth Funeral Service; Employees and Family, is an homage to Velázquez’ painting Las Meninas, and shows the funeral director and entourage in a coffin warehouse. That Lenkiewicz was less than sympathetic to those who profited from contemporary death rituals was signified by the inclusion in the painting of a crumpled photograph of a vulture’s head. Lenkiewicz was asked what the photograph signified by Dr Philip Stokes -- Lenkiewicz replied: "It’s them." 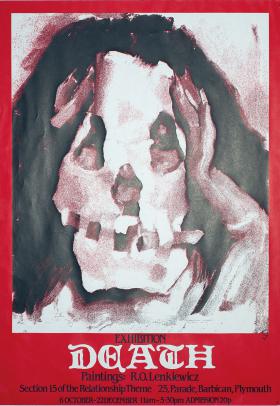