The Lenkiewicz Foundation, with the aid of Dr Antony Knights at Plymouth University, has used laser technology to scan the human remains of the vagrant Edwin Mackenzie (1912-1984). Lenkiewicz named him Diogenes after the Greek philosopher who lived in a barrel after finding the tramp dwelling in a concrete pipe in a rubbish tip. Diogenes was soon a permanent fixture at Lenkiewicz’s studio; ‘He was very popular,’ Lenkiewicz said, ‘but there were times when I wasn’t sure whether people were coming in to see Diogenes or coming in to see the exhibition. They were certainly very surprised by him ... this scrawny, miniature Father Christmas.’

The Diogenes Show marks the 40th anniversary of their collaboration in The Masterpiece Museum & The Diogenes Con Show, Lenkiewicz’ ironic look at art and commerce. For practical reasons the expertly embalmed remains of Diogenes cannot make a personal appearance as the ultimate memento mori (‘remember, you will die’) at this venue. However, it is hoped that new technologies – and traditional methods like body-casts – will blur the line between art and artefact.

A number of original studies by Lenkiewicz of his friend, together with photographs, newspaper clippings and a specially commissioned film, show the vagrant as he was before ‘vacating the premises’, as Lenkiewicz would say.

Opening times
The exhibition will be open between 23 September and 23 October 2016.
Thurs–Sun open daily 11am–4pm.

Events - Thurs 29 Sep, 6 - 7.45pm, St Saviours Hall, Lambhay Hill
6.00 pm – Rachael Gomery, TLF exhibitions officer, will present a slideshow introduction ‘Lenkiewicz and Diogenes: remember you will die’. A short film by Jeremy Elman will also be shown, which explores the relationship between the painter and the tramp.

6.45 pm – Dr Mark Price of Manchester Metropolitan University will speak on the theme ‘The Vagrant as Political Agent in the Work of Robert Lenkiewicz.’ 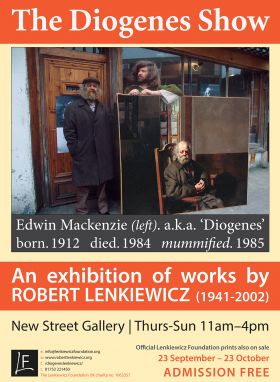