The Mental Handicap Project, like Vagrancy before it, and the Old Age Project which followed in 1979, are often remembered with the greatest affection by Lenkiewicz’s admirers. To persuade so many families to participate in the Project required great sensitivity and tact and this is evident in the pathos and dignity of the resulting paintings. In Mental Handicap Survey Plymouth, the booklet accompanying the exhibition, physiotherapist Dr Hans de Rijke, who became a lifelong friend of the artist, summed up the public perception of the exhibition as: “... a mirror to the world. There but for the grace of God go I. Hence this exhibition. These are people. These are part of our society. They are ourselves.” Each family contributed to the survey their response to a short questionnaire about the impact of their child’s condition on their lives.

But it is generally overlooked that in the notes for the Mental Handicap exhibition Lenkiewicz railed against the “ritual of maudlin altruism” which forced the parents to go cap in hand to society:

A handicapped child means a handicapped parent... complaint has produced most of our art and literature, and most of our social and educational patterns. We say “Why me? I did not deliberately inflict this problem upon myself.” And here is where we miss the point, for we assume that we do anything, anything at all, deliberately ...Over the last eight months, four hundred persons and myself have been engaged upon an act of complaint. (1976)

This is entirely consistent with his Nietzschean view that altruism is simply self-interest with its agenda carefully hidden and, like pity, the Christian virtue most despised by Nietzsche, both demeans and condescends.

I am revolted by any notion of altruism. … I have to be quite sure that my motivations are aesthetic and intended to achieve a certain end. I don’t for one moment even want to hint at suggesting that I am concerned for the welfare of another human being; to me that would be blind, ignorant, insensitive and thuggish. (1997)

The Mental Handicap exhibition was staged in the same warehouse studio as the Vagrancy show (28 August 1976). Lenkiewicz’s full-size homage to Rembrandt’s The Night Watch was the centrepiece and depicted various local professionals involved in the care of those with learning difficulties. Lenkiewicz's Self-Portrait after Franz Xaver Messcherscmidt appeared as Item A in the list of works, with the ironic caption

This person is “NORMAL”. He/She is not mentally handicapped.
Price: £Very expensive but always available at a price. 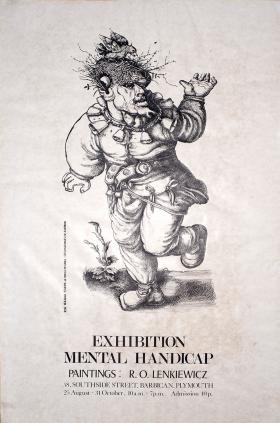