Lenkiewicz produced Self-Portrait, Section Ten of the Relationship Series, at the end of 1978, an ironic look at the relationship between the artist and his own self.

I wondered what it would be like just to paint myself; to paint what I saw in the mirror repetitively. Well, within half a sitting I became aware that all I was doing was painting a picture of a mirror; there just happened to be something there reflected in the mirror.

Lenkiewicz quoted Nietzsche’s aphorism about the problem of knowledge of the thing-in-itself, seeing in it an interesting parallel to his thesis that “the ‘other’ can by physiological necessity … only ever be a fragmented mirror”:

However, the centrepiece of the show was the painting The Dead Painter Surrounded by his Children and Companions, “a parody of the death of his own mother and a drawing by André Slom of Courbet on his deathbed”. An extensive book of notes and illustrations relating to its overarching theme – Et in Arcadia ego (I, Death, am in Arcadia also) – was also produced.

... Dead but lit at the ending by candles from my orbit. Each their own sun, awaiting their extinguished moment... child-philosophers stare in passionless silence at my passing.

There is presently little documentation which survives for this Project - no list of works has emerged, for instance. However, in 1988 the artist produced a remarkable set of notes for an exhibition of works preliminary to Project 18, which contains a significant essay on the theme of self-portraits much of which is possibly contemporaneous with Project 10. This has been included as a PDF (click on Exhibition Booklet). 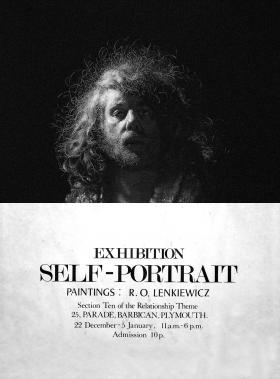