The Coming of Age

A Dance to the Music of Time

“Dying while young is a boon in old age.” Yiddish proverb.

When, in 1979, artist Robert Lenkiewicz (1941-2002) set out to paint portraits of as many 100 year old Plymothians as he could find, the most recent census told him that Britain’s population of 100 year olds had grown to nearly 2,500, a ten-fold increase since the coronation of the Queen in 1952. But given Plymouth’s share of the UK population, he knew was only likely to find 9 or 10 such sitters locally. In the end, of the fifty portraits he painted, just three were of centenarians. He contacted most of the elderly subjects of the paintings via Elspeth Sitters House, at that time a day centre for Age Concern (now ageUK), which was a two minute walk from his Barbican studio. In 1982, Lenkiewicz created a mural at Elspeth Sitters House. Over 10 metres wide, it was painted in a vibrant style with vivid colours, based on Poussin’s famous painting ‘A Dance to the Music of Time’.

But Lenkiewicz’s interest in the elderly as an example of what he called society’s ‘invisible people’ stretched back to his early teens. His parents, Jewish refugees who fled Germany for Britain in 1939, ran a ‘kosher hotel’ in Cricklewood, which had become a kind of old people’s home. Lenkiewicz was profoundly influenced by the experience: ‘I was introduced to all kinds of things - mental illness, human suffering and, above all, death at a very early age and thought it salutary and thought provoking.  My first sitters were those people - Mrs Jacobus, Mrs Webber, Mr Meyers, Mr Marx - they all sat for me on huge canvases.’

Lenkiewicz was invited to deliver a lecture to the Age Concern audience at Plymouth Medical School and set out to deliver something more thought-provoking than the usual practical topics of health or housing. In November 1979, Plymouth’s elderly community were introduced, therefore, to the elderly Professor Jeremy Jacobson, who tottered onto the stage and delivered a commentary on ‘Geriatrics versus Gerontology’: that is, living well vs. living a long time. He’d compiled an exhaustive compendium of notes and aphorisms by philosophers, saints, artists, writers, musicians, and scientists who spoke of the coming  of old age as nothing short of calamity - a thesis at total variance with the Age Concern ethos of a ‘green old age’. A single quote from Voltaire captures the tone: “The heart does not grow old, but it is sad to dwell amongst ruins.”

Of course, Prof. Jacobson was none other than Lenkiewicz himself, expertly disguised with theatrical make-up and props. At the end of his lecture he pulled away his disguise, becoming in a single instant both the most popular and most reviled speaker at such an event. But the artist’s serious intention was to galvanize his audience, whom he felt had entered into a conspiracy with younger generations to disappear into a quiet ‘cared for’ existence, at the cost of suppressing passions and hopes that burned as bright at 80 as they had at eighteen. And in his portraits of elderly people, Lenkiewicz aimed simply to capture the plain fact of their existence, to remind visitors to his exhibition that one day, inescapably, everyone would face the coming of age.

By 2018, the UK population of centenarians had grown to 14,500. In 50 years, it is projected to pass 400,000. This demographic fact has staggering implications for society as a whole, not least those who will find themselves living a quarter century beyond retirement age. How will they live? Who will care for them? What will their quality of life be? ‘A Dance to the Music of Time’, the social project coordinated by St Saviours CIC, hopes to start a conversation around this topic.

Events start on 27-29 September with THE COMING OF AGE. This Plymouth Art Weekender 2019 show will see the launch of a series of events marking the 40th anniversary of Lenkiewicz’s project on Old Age (1979). We begin with an exhibition at St Saviours Hall (27, 28, 29 September) showing paintings by Louise Courtnell. The paintings are a selection from fifty of Courtnell’s studies of the elderly villagers of Kingsand and Cawsand in Cornwall. Like Lenkiewicz, who tutored the artist intensively for two years, Courtnell asked her sitters to record their memories of village life.

In keeping with the general theme of how the experience of ageing has changed over the past four decades, complementing Courtnell’s oil paintings will be previously unseen material from the Lenkiewicz archive. This includes sketches and biographical notes Lenkiewicz made between 1967-69 of elderly neighbours he befriended at his first Plymouth residences, together with the first known studies of vagrants such as ‘Bishop’ (Albert Fisher). In these notes and sketches we see Lenkiewicz deploying his ‘oral history’ method to engage with ‘the invisible people’ in society. In addition, sections of the project notebook on Old Age will be reproduced, giving an insight into the artist’s research.

In the months that follow, the full 40th anniversary project will unfold, under the rubric ‘A Dance to the Music of Time’. Supported by a £10,000 grant from National Lottery Awards For All scheme to St Saviours CIC (http://stsaviourscic.org/), the events of ‘A Dance to the Music of Time’ will explore Lenkiewicz’s original project and link it to contemporary developments in the lives of the 90+ yrs community in Plymouth. 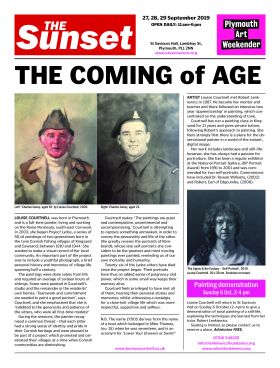