Section Five of the Relationship Series was called Love & Mediocrity and it was a dissection of the notion of fidelity. Titles such as Man and woman trying to kiss each other in front of all their lovers of the past and all their lovers of the future suggested the presence in every relationship of a long regress of memories and associations which made a mockery of the idea that in the love relationship one ineffable and unchanging ‘essence’ was connecting with another.

The notebook for this Project looks like the scribblings of a medieval geometer – it is full of strange arithmetic, diagrams and formulas attempting to work out equations with the longevity or intensity of desire on one side of the equals sign and the duration of the withdrawal symptoms on the other. There is a section on "addiction ladders" in which he notes, "The memory of an incident halves in intensity each time it is thought about until it becomes as finite as forgetting allows." Writing of the shock of infidelity or ‘betrayal’ Robert stated:

The shock is in no way connected with the ‘other’ person, for they could never be the cause. Oneself and the mirrored image of oneself – disguised as the other person – play this trick time and again.

This turn towards the language of addiction is key to understanding Robert’s work of the late 70s and early 80s. His conviction that what most people think of as emotional or psychological phenomena are in fact instances of physiological behaviour, of the ‘self’ governed by the body’s mechanisms, was leading to certain inexorable conclusions. The first was that in the love relationship what one experienced was not the other person, nor any real connexion with them, but rather one’s own physiology. Just as the brain perceives the retinal image, not ‘the world out there’, the lover experiences only their own physiological sensations. The other person is at most a trigger for this self-intoxication and auto-obsession, or a mirror for our own preoccupations:

The experimental lover finds that a constant sequence of breakdowns in relationships is supported by the softened edges of previous ‘reflections’ and ‘refractions’. Each time the mirror is employed the memory resituates or ‘refracts’ the experience through the image of the following one. ... It is a startling thought that as we suffer so deeply from the withdrawals of the ‘present’ scenario, the next situation is heading inexorably towards us from the future; and it too will be replaced by a sequel. (Love & Mediocrity exhibition notes, 1976)

Although the visual imagery for the relationship Projects was often referred to by the artist as "private language work", he nevertheless felt that his insights had universal validity. Speaking to local televison during the Love & Mediocrity exhibition he stated:

I think that in all reasonableness these ideas would be sympathized with generally. The experience of memories, of the endless cyclic process of one relationship after another, or indeed a single relationship, the mirror image undertones, the way we become addicted towards the aesthetic disease, the aesthetic germ called 'the other person'. (1976) 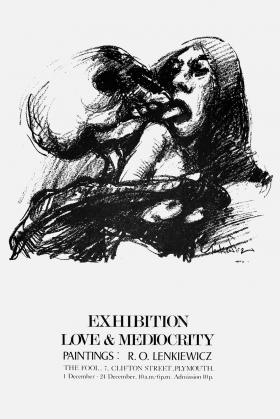