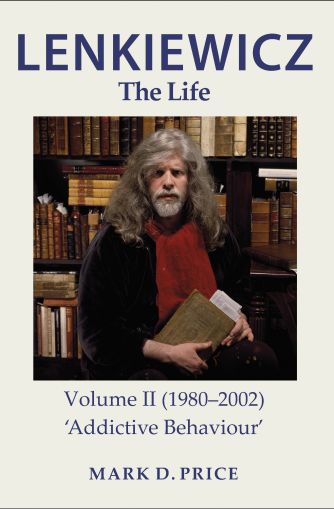 Robert Lenkiewicz sought the total fusion of Life and Art. Determined to make every day ‘an experiment in living’, he became infamous for faking his own death, and embalming the corpse of his regular model, the vagrant ‘Diogenes’ (Edwin Mackenzie). His extraordinary skill in painting directly from life created a series of immense projects spanning forty years, combining visual art, philosophy, and social activism, often illuminating years ahead of his time the lives of those he termed ‘society’s invisible people’.

This second and final volume of Mark D. Price’s definitive biography distils the contents of Lenkiewicz’s previously unseen private notebooks, diaries, and correspondence, and includes interviews with partners, models, lovers, family, friends and children. The book tells the full story of Lenkiewicz’s frequently controversial life and philosophy, as well as his prolific output of paintings and his creation of one of the country’s most remarkable private libraries, not only on subjects related to his paintings but his lifelong interest in philosophy, metaphysics and art history. His complex estate was valued in excess of £4 million before being ravaged by tax liabilities, creditors and legal costs. 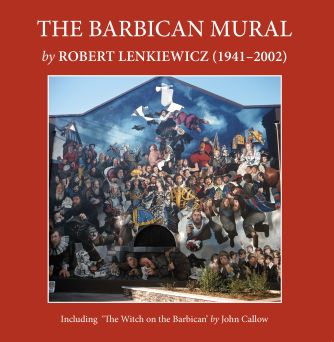 Marking the 50th anniversary of the painting of the Barbican Mural by Plymouth artist Robert Lenkiewicz, this publication reproduces the original guide ‘Notes on the Barbican Mural’, first printed in 1972. In his own words, Lenkiewicz explains his 3,000-square-foot visual celebration of the symbolism, poetry, philosophy, alchemy, ceremonial magic, and the influence of Jewish thought on culture in the first Elizabethan Age between 1580 and 1620.

A new essay by cultural historian John Callow – ‘The Witch on the Barbican’ – explains the mural’s origins in Plymouth’s famous historical connection to the sailing of the Mayflower to the New World in 1620. The author identifies many of the artist’s friends and associates who modelled for the historical figures, and draws out the hidden meanings in the mural’s complex symbolism.

The trustees wish to thank Kaya Gallery for sponsoring the production of this publication. Please visit them in at 53 Southside St, Plymouth PL1 2LA and see their selection of Lenkiewicz originals, limited edition prints, and books. 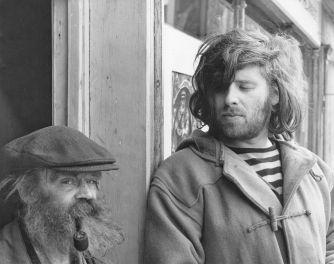 Edwin Mackenzie, known as Diogenes, laid to rest twenty years after the death of Robert Lenkiewicz

In the twenty years since Robert Lenkiewicz’s death in August 2002, The Lenkiewicz Foundation has worked to secure a lasting legacy which will ensure the preservation of as much of the artist’s archive as possible. His voluminous diaries and notebooks are now stored securely, courtesy of The Box (Plymouth Museum), and much of the archive has been digitised and is available on the Foundation’s website or on request to researchers or for educational purposes.

Later this year, the second and concluding part of the comprehensive first biography by Dr Mark Price, commissioned by the Foundation, will be published.

As many people know, after Lenkiewicz’s estate was resolved, the Foundation became the custodian of an embalmed human cadaver under a license issued by the Human Tissue Authority. The remains are of the vagrant Edwin Mackenzie (1912-1984). Known as Diogenes, Edwin worked for fifteen years as an assistant to the artist Robert Lenkiewicz (1941-2002) at his studio in Plymouth. With Edwin’s permission, after his death the body was professionally preserved, becoming a thought-provoking artefact within the painter's extensive library on the theme of death.

The question about Diogenes’ long-term future is one which the Foundation has consistently asked itself, considering both practical and ethical issues. With increasing costs associated with the licensing requirements, this question has become more pressing in recent years. Various avenues have been explored, including approaching suitable national collections and museums which have philosophical and educational links with Lenkiewicz’s ideas, in the hope that they would be interested in adding Diogenes to their collections. All the institutions approached expressed similar ethical concerns about long-term exhibition, storage and care. Therefore, it is with sadness that the trustees of the Foundation have taken the difficult decision to arrange an appropriate burial.

The story of Diogenes still exists and much of the associated documentation about him and his relationship with Robert Lenkiewicz is now in the public realm. There will remain, of course, the countless paintings and drawings that Lenkiewicz produced of his friend over many years. 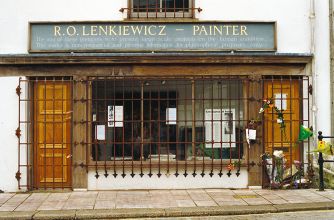 20th anniversary of the death of Robert Lenkiewicz

The 5th August marks the twentieth anniversary of Robert Lenkiewicz’s death in 2002. Last year saw the publication of ‘All Are Welcome’ by Mark D. Price, volume one of the first biography of the artist, commissioned by The Lenkiewicz Foundation.

Francis Mallett, Chair of trustees says: ‘We are on course to publish the second and final part of this extraordinary biography later this year. Author Dr Mark Price was given full access to the artist’s large archive of diaries and private notebooks, which were bequeathed to The Foundation. These are now being stored securely by The Box (Plymouth Museum) in properly controlled conditions. Much of the archive has now been digitised and is available on request to researchers or for educational purposes.

As well as the biography, The Foundation also hopes to republish Lenkiewicz’s original ‘Notes on The Barbican Mural’, a guide to his most well-known public artwork, whose slow decay has sadly proved impossible to halt due to being created directly on an unsuitable surface using poor quality materials.

Since the artist’s death The Foundation has curated numerous national and international exhibitions, including Plymouth City Museum; the Ben Uri Museum in London; the Royal William Yard in Plymouth; the first international exhibitions in Germany; Torre Abbey, Torquay; and The Royal West of England Academy in Bristol, where the embalmed body of Lenkiewicz’s regular sitter and companion, the vagrant Edwin Mackenzie (often known as Diogenes) was also displayed. The second part of the biography will relate this remarkable story in full.

[The photo by Philip Stokes shows the Barbican Studio in 2002 after the artist's death.]

Robert Lenkiewicz (1941–2002) worked within ‘Projects’: large-scale exhibitions of paintings and research notes related to sociological issues. His themes – vagrancy, mental handicap, old age, suicide, death – sought to illuminate the lives of those he called “the invisible people”. In other Projects –- with themes of falling in love, jealousy, orgasm, and obsessive attraction – Lenkiewicz looked at “addictive behaviour” of various kinds.