The strain of producing more than a hundred finished canvasses for the 1994 showing of Project 18 at the ICC in Birmingham exacerbated Lenkiewicz’s heart condition. He underwent heart by-pass surgery at St Bart’s Hospital in 1995. During his convalescence at the quiet Mudbank Lake Cottage on an estuary in south Devon, Lenkiewicz produced a modestly sized Project of fewer than forty pictures on the theme of Landscape – The Painter as St Jerome.

Lenkiewicz had a youthful fascination with a painting by Flemish artist Joachim Patinir (c.1480-1524), Saint Jerome in a Rocky Landscape, which hung in the National Gallery collection. Renaissance images of St Jerome traversing desolate, stony landscapes, fording rivers or crossing mountain ranges presented the existential formula of “Man, lost, missing, in a terrifying infinity,” and indeed Lenkiewicz remarked that much of the work in the Project “related to feelings about isolation”.

From the 1997 Retrospective notes:

“Everything takes form, even infinity.” Bachelard.

“A lake is the earth’s eye; looking into which the beholder measures the depth of his own nature.” Thoreau.

In 1995 Lenkiewicz returned to an adolescent preoccupation - Landscape. In early youth he would stare out of the window from the bed he slept in, mesmerised as so many young people are, by the huge swathes of clouds mounted in the sky like a vast cathedral vault. It was difficult at that time to grasp that the sky ceiling was the largest dome on the planet, but one could certainly understand why clouds were called ‘the thrones of gods’. A small exhibition of his at St. Martin’s School of Art comprised of 20 drawings of steam, recorded from the trains at Paddington Station. Only in recent years has Lenkiewicz returned to working in isolation in woods or by a lake, where he planned a large project titled Landscape: the Painter as St. Jerome. This project was intended as an enquiry into the relationship between natural forces and a single person. Forty of these paintings were shown at the Barbican Museum and Library Annexe. He wrote:

“In youth every window, every door opening framed the world outside. There were two kinds of space, the intimate space where I stood and the exterior space that one could believe expanded consciousness. The larger the space observed the more timeless, meditative, even exalted one could feel. Space has been termed a ‘Psychological transcendent’.The larger the context in which we stand, the greater our solitude. Our eye eliminates boundaries, nothing con­tradicts; distance shuts off moral codes.”

In student days when Lenkiewicz visited The National Gallery, which was frequently, he was struck by the images of St. Jerome, and in particular a small panel by Patinir. From the early 17th Century images of St. Jerome had developed into theatrically lit excuses for recording sinewed, taut and wasted elderly men - almost an illustration for medical students studying anatomy, of cadaverous musculature. Before this phase however, St. Jerome would be hard to find, as he sat lost in a vast, stony and desolate landscape traversing rivers, forests and mountain peaks. The clear purpose of such imagery was existential; man lost, missing, in a terrifying infinity. Man insignificant. Images like these are the stuff of tragedy; late Michelangelo, late Goya, late Rothko.

“All human enterprise seems to evaporate into the vapours that we inhale and exhale by seeing. Seeing is eating, our visual mouth can swallow universes, exhale the starry night. When we are moved, we are filled. To be touched by tings is to be made smaller, to be diminished. In one aesthetic mood we ride clouds and leapfrog oaks, in another we sleep beneath a leaf and nestle with insects. Space is a state of mind, agoraphobic and claustrophobic. We are strangely haunted by events that are innocent of themselves, we do not sry “Show off” to nature. We are silenced into meditative irony, diminished and expanded, an elastic perception of minutiae one moment and infinity the next.”

In future developments of this Project Lenkiewicz intends to expand the themes of Earth, Air, Fire and Water. 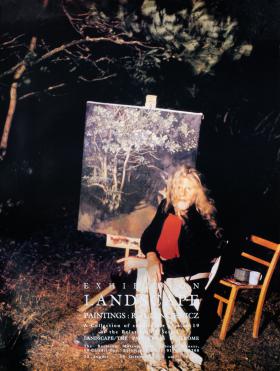