Addiction to the ‘other person’ and its consequences was explored in Section Eight of the Relationship Series, Jealousy, shown at The Fool in the late summer of 1977. Several of the notebook’s pages explore the theme that “envy occurs between two people but jealousy requires a third”.

Robert viewed jealousy as a form of withdrawal symptom:

…the experience of jeal­ousy is the experience of being withdrawn from one’s own addiction, from one’s own drug, that one has inflicted on oneself – nothing to do with the other person. Not every­body sees it in the same way. And that infliction, that process, that peculiar suicide, is an aesthetic phenomenon entirely. (Philip Stokes Journals, Vol.2)

As such, these withdrawal pains were in no way different to those experienced by the street alcoholics of his acquaintance:

Perhaps the lover operated with a similar physiology. The visceral sensations experienced by the jealous lover torment and isolate with remarkable clarity. (1977)

The vagrants – people who “would cut your throat for another drink” – had told Robert that first time one tried to kick alcohol the withdrawal symptoms were almost unbearable but after the third or fourth time it was just “a shit and a shave”. Robert equated the strength of the original attraction with the intensity of the withdrawal pangs and also with the longevity of the attraction. He concluded that it was not the case that certain people were more prone to jealousy than others; the degreee of jealous feeling was proportional to the severity of the original attraction.

Robert was especially interested in the observation that painful feelings of jealousy could be provoked in full measure simply by a lover’s inattention as much as evidence of actual infidelity. The study The claw moves in the stomach as she leaves (1980) notes that:

The obsessive is as undermined by her leaving to fetch coffee as he would be if she left to fetch [Marlon] Brando.

That the jealousy theme should also recur within the later Project, The Painter with Mary: a Study in Obsessional Behaviour (1981), is no coincidence: the painter’s obsession  with his reluctant muse, Mary, was in full spate in 1977.

Other images such as She left her scarf behind or My paint rag was her dress explore the way objects could act as proxies for the other person, evoking sensations as powerful as the presence of the person themselves. Lenkiewicz also observed that the ‘whole person’ was not even the object of attraction; mere parts would suffice — “the colour of her hair, the shape of her mouth, the sound of her orgasm” were all “aesthetic packages” that might ensnare the attracted party:

It’s physiology that matters. If the attraction is there, having seen that waist or that bum or the shape of that breast, or heard the sound of that orgasm, felt the texture of that skin, if that is there it’s going to last, it’ll have a certain longevity, inherent in whatever potential for endurance that aesthetic package has. (1997)

Paintings like Man Holding On to the Parts He Liked Best illustrate this.

Jealousy was turning point, a summing up of the ‘relationship’ investigations of the 1970s. His diaries record a kind of epiphany which struck him in the early hours on 1 August 1977:

2.30am approx. One of those moments again. Have thought so much about jealousy, etc. Could not resolve anything of it apart from disparate relevances. Walking through Southside Street: suddenly with a shock it all came together in the formula of entrails and all the hidden meanings of why I constantly return to viscera. The theme of pregnancy in direct relation to cannibalism where suffering (aesthetic withdrawal symptoms) is undergone became – crystal clear. Jealousy, murder and ultimately suicide, is all the withdrawal can lead to in terms of the ‘enjoyment of misery’ as another [aesthetic] taste extension. Tremendous sense of joyousness when so much of what I have been thinking came together in this pathological image. (diary, 1 Aug 1977)

All the elements of his mature understanding of ‘the falling in love scenario’ were now in place: that love was an addiction and jealousy a withdrawal symptom; that the process was visceral or physiological in nature and had nothing to do with psychology or the fancies of poets; that the ‘other’ was not the object of the attraction but rather those ‘aesthetic packages’ peculiar to our own tastes.

Summarising the aims of the 'relationship' Projects, Robert said:

I just wanted to observe what it was about human physiology that would become dependent on another human being. It took me some years to draw the conclusion, rightly or wrongly, that one can’t claim that it’s the other person; the only claim that can really be made is a description of the victim’s own physiology – that is what they’re experiencing.  When one identifies the cause of that distress as being the other person, there one enters into areas of mistaken identity and thoughtlessness, brutishness and fascism. (1997)

Robert had begun to suspect that that this aesthetic impulse to select and focus on one preferred individual, who was most pleasing to our personal taste but for arbitrary and contingent causes, underpinned some of the darkest aspects of human behaviour. On the one hand, the tendency to prefer one person over another implies that we exclude those less pleasing to us and to denigrate them as lesser beings. In the notes to more than one exhibition he would quote Nietzsche’s warning on this issue: “Love for any one thing is barbaric, for it is exercised at the expense of everything else. This includes the love of God.” (Aphorism 67. 4th article. Beyond Good and Evil)

On the other, he observed that strong attraction towards another person induced one to treat them as property. The object of our attraction often became the focus of a ruthless conspiracy to control them, much like an addict seeks to control the supply of his drug of choice:

‘I often feel that in the most intense romantic scenarios… there is an undertone of ruthless psychopathic expectation, a curious heartlessness. If one had genuine concern for one’s partner then the first thing one would do is leave them.’ (1997)

Robert coined phrase to describe the tendency to select and exclude and to treat the other person as a means to an end — ‘aesthetic fascism’. The phrase encapsulates the nature of relationships as aesthetic experiences tout court, the extreme selectivity of our attractions and the ruthlessness which tends to make us treat other people as property – “the straight road to fascism”, as Lenkiewicz called it.

My consciousness of what I call “aesthetic fascism” came through a study of aspects of human relationships, the way people behave with each other, become dependent on each other. The notion then expanded: well hang on, if they’re quite interested in each other (or think they are), and become addicted or preoccupied with that, then why don’t they do the same with ideas? I began looking at the arts, at ideologies and belief systems, theological and political persuasions, from an aesthetic point of view and a physiologically aesthetic point of view. (1997)

Philip Stokes recorded Lenkiewicz’s mature formulation of these ideas during a visit to the painter’s studio in 1990:

“[A visitor to the gallery] asked Lenkiewicz what his overall objective for all his studies was; to which he replied, ‘An investigation of the origins of fascism by enquiring into obsessional behaviour in all its forms’. I’d never heard him speak in just those terms, and sensed it as important”. (Philip Stokes Journals, Vol.3, p. 78) 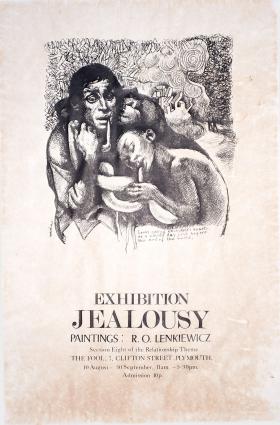