Man Eating His Heart and Entrails. 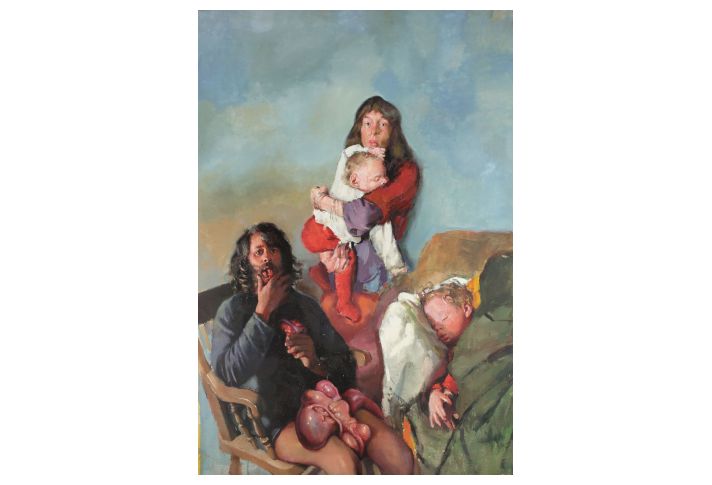 Lenkiewicz generally created a centrepiece image for each Project, one which dominated the exhibition either in sheer scale or visual drama. This painting was originally a single large canvas called Man Eating his Heart and Entrails. Sitter for the painting Annie Hill-Smith explains that:

“…after the piece was shown in Jealousy and the project was complete he cut the painting into two parts and then painted the so-called 'still-born' (which I would call abortion) image onto the smaller section (that part was put on in Plymouth). It was then hung in the Death project, so you see that the two parts are simultaneously conjoined and distinct.”

In her review of the exhibition ‘Robert Lenkiewicz: Still Lives’ at the Royal West of England Academy, Bristol in 2011, Hill-Smith described the motivation for the painting:

“He was exploring jealousy in that project using his so-called ‘private language’ paintings. That is, he was using his skills of painting things that look like things to try to represent some of the very visceral stuff of jealousy. You know that visceral feeling (I'm sure you do) … he thought that most people would recognize it and that the representation of the viscera pouring out of him would 'speak' to the viewer of those painful feelings. So this one was one of many in that project that all 'spoke' to you the viewer (he hoped) of the jealousy experience.

Come in – I can’t be threatened by shadows in the dark.

For I am a jealous God.

Her previous boyfriend disguised as a curtain watching her with the new one.

I wonder if I can see in these shadows.

Jealous lover watching a leaf blown by the wind.

Man and woman screaming at memories in the dark.

Man Eating His Heart and Entrails.

Man Watching Himself with Mary.

Man with bits of a girlfriend.

Myriam in red poncho seated on the floor.

Myriam with a Switch.

Still-born in the Kitchen

‘Man holding on to the part he liked best of his girlfriend...