You Offer Me a Dead Rose, May I Give You a Dead Rat? 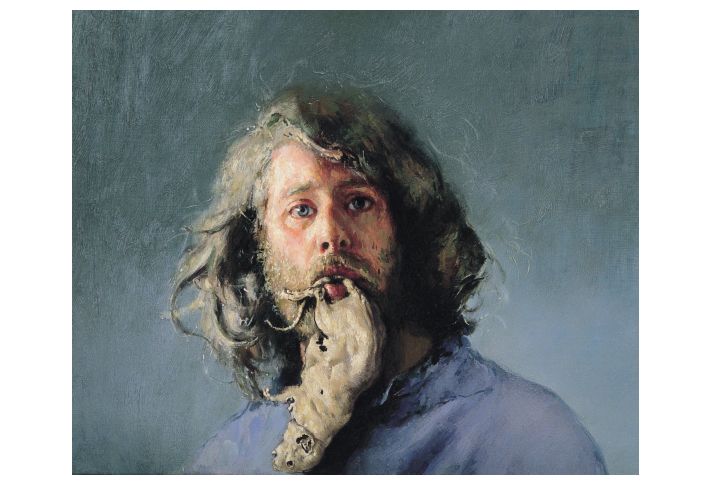 “You Offer Me a Dead Rose, May I Give You a Dead Rat? was one of the few images in his fifth project Love & Mediocrity which was painted directly from life rather than in the ‘private language’ allegorical style he mainly deployed in this Project.

… Many of the ideas behind the paintings in these Projects dealt with the theme of love or the falling-in-love process and the consequences of the breakdown of a relationship, which he saw as a kind of putrefaction, aptly illustrated by the dead rat, a medieval symbol of decay and the passing of time.

… Robert was on one of his visits to stay a few days with my family in west London in 1976 when we found a dead rat in the basement of our house. It wasn’t a shocking sight, as in that summer our house had been plagued by them, so much so that we even had our family photo on the front cover of the Paddington Gazette.

… Apart from the self-portrait on the Barbican Mural, it is probably this self-portrait of Lenkiewicz’ that is etched in my earliest childhood memory. Robert eating a rat appealed to my childhood imagination, which was filled with stories of Sinbad, the Greek myths, ogres and films like King Kong. It is a painting that seems to sum up for me Robert’s life at the time in Plymouth: his monstrous vitality and awe-inspiring talent. I can still recall on my childhood visits to see Robert the aroma of the tramps, pisspots and vomit, as well as turps and oil paint, his rare books, freezing studios and vast numbers of beautiful women.”

You Offer Me a Dead Rose, May I Give You a Dead Rat?
Project: Love & Mediocrity
Medium: Oil on board
Size: 41 x 56 cm

Holding on but her eyes are open.

Lovers dancing over the graves of previous lovers.

Lovers getting to know each other.

Lovers in a Street.

Study of Belle Pecorini in the kitchen, Priory Rd.

The Auto-Lover Hydra with Seven Memories.

The Burial of Belle Pecorini and Monica Quirk.

Woman watching man look at himself in a mirror.

You Offer Me a Dead Rose, May I Give You a Dead Rat?