The Father Eats His Son. 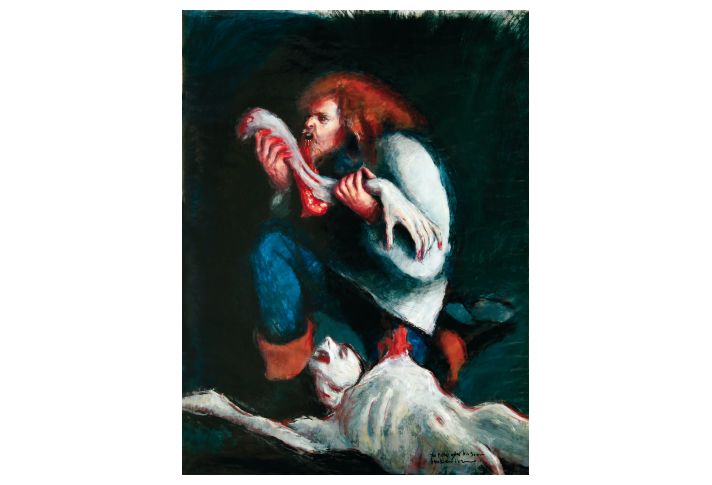 “Perhaps the most startling of the Black Paintings was inspired by the picture Saturn Devouring His Son painted in 1636 by Rubens. Goya must have seen this painting in the Royal collection in Madrid. Rubens’ god is set in the middle of the composition. The anatomy is idealised, the horror of the scene underplayed. The god’s face is averted as he is caught up by the task in hand; the only legible expression is the child’s anguished face. Goya transforms this baroque model.

His giant is literally off balance, leaning in from the side of the composition, as if unexpectedly caught in our view. His anatomy emerges piecemeal from the darkness; sinewy, aged, no idealisation. The child being eaten is beyond reaction. The focus is shifted to the crazed expression of the god, an embodiment of paranoia and fear.

Early Victorian photographs of this painting indicate that the god’s sadistic ravings were graphically represented by an erect phallus – removed before the paintings were put on public view. Apparently the detail of a bloody, half-eaten corpse was less offensive to nineteenth century taste.

What do these paintings mean? We must remember the ‘positioning’ of each of the fourteen or so paintings on the two floors. Goya’s Saturn was on the ground floor. Saturn, god of melancholy and time, an emblem of the ageing artist’s own pessimism, was seen to dominate the scene.”

[From ‘Lenkiewicz on Goya’, a lecture at Plymouth Arts Centre given before a screening of ‘Goya In Bordeaux’, 1999]

Sketches for 'Study of the Painter’s Dead Mother'.

Study of the Painter’s Dead Mother.

The Father Eats His Son.

The Painter Holding Himself When Ninety.