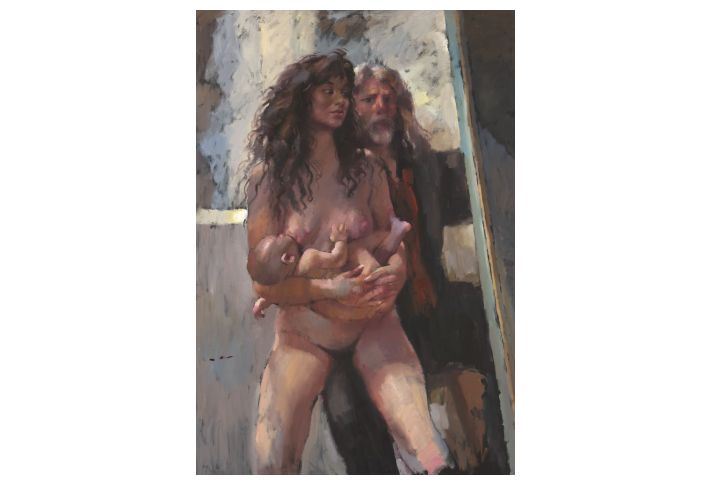 Lenkiewicz laboured on Project 17 – Observations on Local Education for five years, producing 150 finished paintings of more than twice as many sitters, including pedagogic radicals, teaching professionals, educational bureaucrats, school governors, and schoolchildren. The accompanying 2-volume publication contained 400 pages of ‘observations’ written by these sitters. The artist was convinced that every local parent would take a passionate interest in the attitudes of the people teaching their children. However, the Project met with apathy from public and press alike: attendance at the exhibition was poor, reviews in the local press rehashed old by-lines about the ‘controversial’ artist, and The Times linked him with the populist Plymouth illustrator, Beryl Cook. The dispirited Lenkiewicz began to question the whole Project approach and wrote in his diary: “Feel a strong leaning towards reclusive hard work for the future only.”

This is one of the earliest ‘double’ paintings which the artist planned to show in a small-scale exhibition outside his own studio and without a Project designation. Lenkiewicz couldn’t imagine a more important subject for study than the relationship between adult and child, which he also believed lay at the heart of the educational process:

Adults rarely feel that their lives are significant, and many of these adults are parents. The young person’s sensitivity to example is immeasurable. A parent or mentor whose creative life is passionless, dulled and uninspired, will have great difficulty in valuing themselves. To de-value oneself is to de-value others. We do not value another person by feeling superior or inferior to them. That is the straight road to Fascism.

Lenkiewicz had long planned a Project on the theme of ‘the family’ and several of the Education Project pictures featured Karen Ciambriello, heavily pregnant with their daughter Thaïs, who was born in the Spanish canopy bed in the Barbican studio in 1988, together with other family studies.

When model Benedikte missed a late-night sitting for her ‘double’ themed painting, rather than waste “all that work and build-up to tonight’s painting” the artist collected Karen and the infant Thaïs from their home near his studio. His diary notes for that evening reveal him in combative mood, sitting in his library planning a new series of paintings that would take on the negative press responses to the education pictures which pigeonholed his work as ‘shocking’ or prurient:

Did full-size tonal study of the three of us – ‘Double theme’. Rich image – strangest of the three pieces so far. Much thought on enraging Project on the theme of ‘The Painter and Women’.

The Painter with Karen and Thaïs.
Project: The Painter With Women: Observations on the Theme of the Double
Medium: Oil on canvas
Size: 137 x 90 cm

Anna in the Garden at Lower Compton.

St Antony in the Desert Playing with Demon.

The Painter with Benedikte.

The Painter with Janine Pecorini.

The Painter with Karen.

The Painter with Lisa Stokes.

The Painter with Mary.

The Painter with Monca and Reuben.

The Painter with Patti Avery.