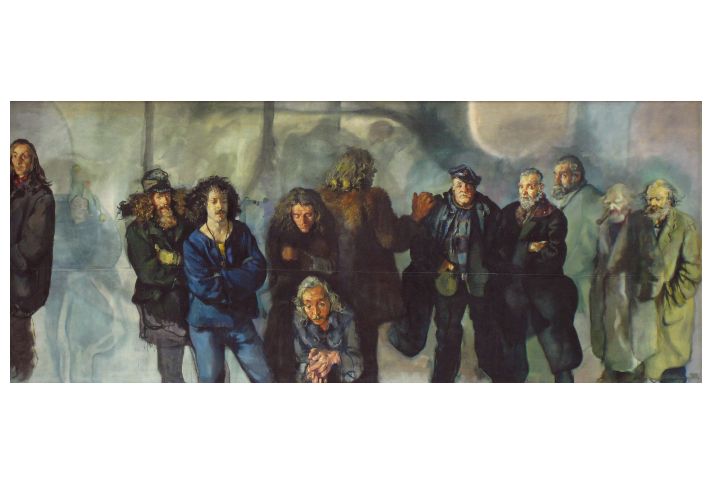 Painted as if from the point of view of the recently deceased dosser, John Kynance, Death appears as a jester, mocking the living. It is based on Gustav Courbet’s painting Burial at Ornans (1849-50). Like many Lenkiewicz paintings from this period, it was made on sewn-together strips of sailcloth. Lenkiewicz, perpetually short of funds and frequently visited by debt collectors and bailiffs, was glad of any painting materials he or the vagrants who knew him could recover from the Barbican sail lofts or chandlers. It was one of the three huge canvasses that dominated Lenkiewicz’s first ‘Project’ on Vagrancy, exhibited in an old warehouse on Plymouth’s Barbican known as ‘Jacob’s Ladder’ since it lacked proper steps at the entrance.

Lenkiewicz’s booklet Observations on Local Vagrancy states ‘The Fool survives where the wiser person might die; the survival of the Fool does not make sense, it is as if part of the Fool operates in another dimension. … the Fool, unable to stabilise his situation or mood, reflects the vacillatory undertone of chaos and order, life and death.’ Lenkiewicz’s gallery in Clifton Street at this time was named The Fool.

This painting, last of the large canvasses from the Vagrancy Project still intact, was destroyed by a fire at the property of the collector who owned it in 2012. It was last exhibited at the Royal West of England Academy in 2011.