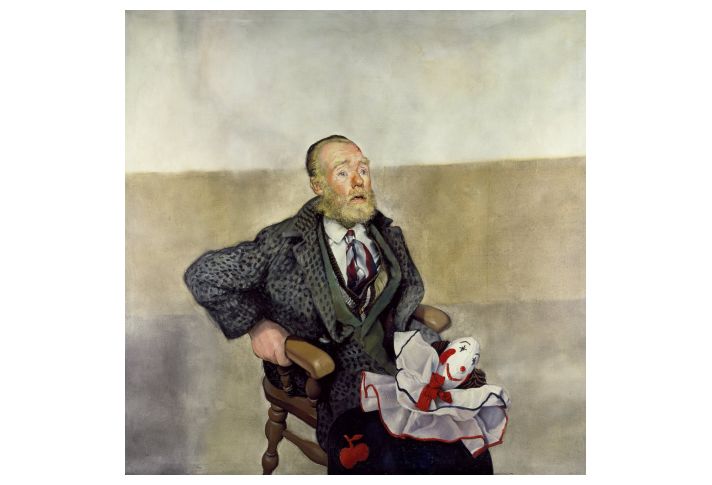 [From R.O. Lenkiewicz, 1997] "It’s very true to say that I would form deeper relationships with some of the ‘cowboys’, dossers, alcoholics, vagrants, call them what you will, than with others. There is something about some of them that is similar to St. John in the desert, a character who interests me more than Jesus. There is something about the desert father, this notion of 'acidia', of not looking to the horizon and not needing to be distracted.

The most startling of them all was ‘The Bishop’, as he was called—Albert Edward Ernest Fisher.  He was a most extraordinary man: he was an alcoholic; he slept rough most of the time; he was at the Salvation Army for many years. He constructed this posh Oxford accent even though he would say, 'Derbyshire born, Derbyshire bred. Strong in the arm, weak in the head.' He would come up with very sweet epithets, particularly when drunk. He was a tragic figure. He would sometimes ... start to recite poetry that he had learned by rote at school, some sort of special school for orphans. He could never recite much without tears pouring down his face in the most sentimental way. I asked him to open the Vagrancy exhibition; there was a huge painting called 'The Apotheosis of Albert Fisher', now lost, which was about sixty feet long and showed The Bishop rising up into the air with several policemen, another hundred figures at the base. We had a great curtain over it and he was supposed to recite ‘Nicholas Nighe the Donkey’ before revealing the painting. He couldn’t get through it, he started blubbing at the end. He was quite an unsentimental character himself, but anything that related to youth, the passing of things and winged creatures would move him. 'The albatross sleeps on the wing.  I sleep on the wing!' he would say. He could quote large sections of ‘The Ancient Mariner’."