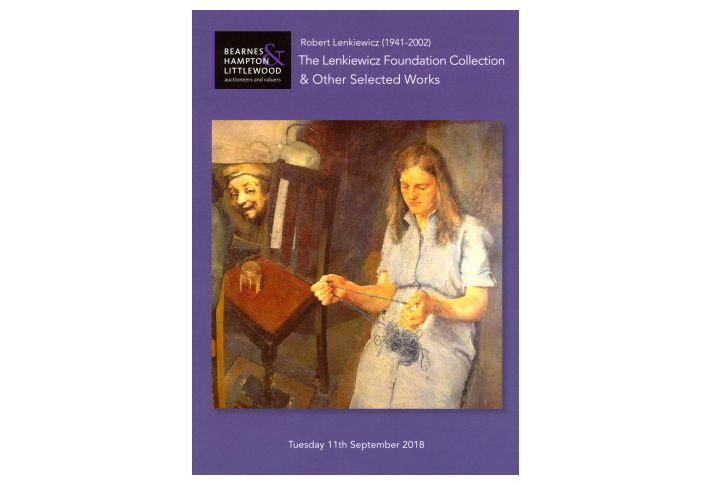 The Lenkiewicz Foundation Collection & Other Works

A unique and fascinating collection of original works by artist Robert Lenkiewicz, who died in 2002, will go under the hammer at Bearnes Hampton & Littlewood on 11 September in their Exeter auction rooms. The works – 40 on paper and four easel paintings – come from the collection of The Lenkiewicz Foundation, the charity which promotes the legacy of the artist. Foundation chair Francis Mallett explains, “The pieces on sale are mostly works on paper – so-called ‘aesthetic notes’ – in which Robert explored his ideas about human relationships in text and images. He created a stunning visual language to get at the heart of what people experienced physiologically when they fell in love, or experienced loss, or became jealous.”

Earmarked for sale in 2008 by the Executor of the artist’s estate, the Foundation insisted that the aesthetic notes should be retained as a collection, allowing it time to analyse their content and exhibit them in the proper context. “Our first exhibition in 2009 showed these works at Plymouth City Museum & Art Gallery. However, some of their content was deemed unsuitable for the general public and the Museum requested that a few be withdrawn,” Francis said. So an imaginative compromise was agreed: the more ‘challenging’ works were shown at a private viewing and a public debate was held to discuss the ethics of showing such work. Francis recalls, “The people who came to the debate overwhelmingly endorsed the decision to display all the aesthetic notes. As Robert assumed, since his work was about the feelings and emotions that we all experience, then people would be genuinely interested in seeing themselves reflected in the work.”

Also included in the auction is the iconic early work, 'Mouse with Wool (Interior)', from 1965, which Lenkiewicz described as ‘a turning-point’ in his work. His 'Study of the artist’s dead mother' dates from 1977, a small work on wood panel created from sketches which Lenkiewicz made at the mortuary where his mother’s body lay – the sketches are affixed to the back of the panel and can be seen through a glass cover. Several other works by the artist owned by private collectors are also included in the sale, with part of the proceeds benefiting the Foundation.

The Foundation has been curating shows of Lenkiewicz’s work since 2008, when it staged Self-Portraits 1956-2002 at the Ben Uri Gallery, The London Jewish Museum of Art. A version of that show came to Plymouth’s Royal William Yard in 2016. Bristol’s Royal West of England Academy saw a major exhibition of portraiture, Still Lives, in 2011. The most ambitious show took the full range of the artist’s work back into the culture which influenced the young Lenkiewicz so deeply: Germany, where his mother, Alice, was born. Human, All Too Human, in 2013, filled the vast halls of a former textile mill turned arts quarter in Leipzig called the Spinnerei; the show then toured to Nuremberg. Westcountry fans were well-served by a preview of Human, All Too Human in galleries at Royal William Yard (2012), and other shows at Torre Abbey (Death & The Maiden, 2012), St Saviours Hall (Love’s Body, 2015), and the New Street Gallery (The Diogenes Show, 2016) in Plymouth.

“It has not been an easy decision to part with works by Robert,” said Francis, “but the Foundation has to support itself financially – as it receives no public funding – if it is to carry out its work and preserve the extensive archive that formed the bulk of the legacy.” That legacy exists primarily in the painter’s diaries, journals and illustrated notebooks and forms an astonishingly rich resource for understanding the painter’s work and ideas. “We’re now supporting research into the first official biography of Robert Lenkiewicz,” said Francis, “which we see as the vital next step in promoting awareness of the work, life and ideas of Robert Lenkiewicz.” But the proceeds of the sale will also help guarantee a secure future for the charity and help it to continue the work of digitising the archive and publishing the content online as a resource for scholars, curators, and archivists.

The Foundation no longer sees itself in future as the chief curator driving the public exhibition program, but the charity will still be there to facilitate shows designed and hosted by other arts organizations and venues. Thanks to the generosity and good-will of collectors, the Foundation is seldom refused when it requests the loan of a painting in order to display it publicly; 90% of the works it has shown are privately owned. “The Foundation’s core principle is to provide information and access to its unique archival resources in order to enhance exhibitions and publications that celebrate Lenkiewicz’s work, and that will not change,” said Francis. “The aim is to embrace the latest digital platforms, as well as established means of communication, to bring Lenkiewicz more fully into the spotlight, in all his complex and thought-provoking richness.”

Catalogues for the forthcoming auction are available from Bearnes Hampton & Littlewood (£5 each, £7 delivered), or free from the Foundation to its Friends membership on request.