Diogenes at Night in Studio Window. 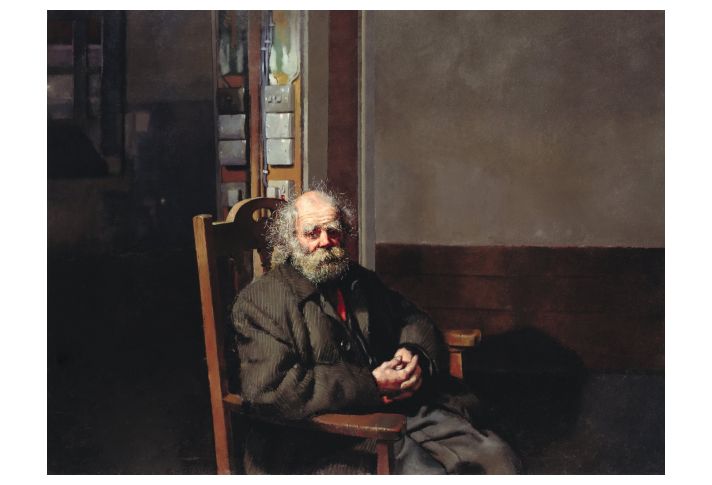 This painting was probably undertaken during the preliminary phase of what would eventually become the Gossip on The Barbican Project (1980).

I called him Diogenes after the philosopher who lived in a barrel because I found him living in a concrete pipe looking down onto Chelson Meadows rubbish tip, and he had lived in there for nine years. I remember lifting up some of the coats that he slept on to find the whole thing teeming with maggots, so he was a pretty rough and ready character. He certainly looked like your archetypal medieval scholar, Johannes Trithemius von Spanheim, say.

I became friendly with him and began to visit him up there and do watercolours of him on site. There is a colour photograph on the front cover of one of the early Daily Telegraph magazines which shows me drawing him and Diogenes smoking his pipe, which he had smoked since he was twelve.

If Diogenes was to be believed, then he had designed and built the Civic Centre building; he had a market garden business with 300 employees; he had won the Grand National once and the Derby twice; he had played for Arsenal; and he had built the Tamar Bridge. And these were only some of his achievements. But he was a most endearing, colourful character. I never met a man who meant less harm to anyone. [R.O. Lenkiewicz, 1997. Plymouth, White Lane Press.]

This painting was loaned to Falmouth Art Gallery for the exhibition 'Effortless brushstrokes' between 11 Feb - 14 April 2012.

John Singer Sargent's maxim was to ‘convey the maximum with the minimum'.

Belle and the Painter

Belle in the Kitchen.

Diogenes at Night in Studio Window.

Megan and Isaac on the bed.

Self-Portrait holding Phillippe Aries’ ‘In The Hour of Our Death’.

Self-Portrait in Pierrot costume with Diogenes (History of The Harlequinade).

Self-Portrait: The Painter in hospital.

The Painter and the dead Painter.