The Painter With Mary in Newspaper Magi-Fools Hats. 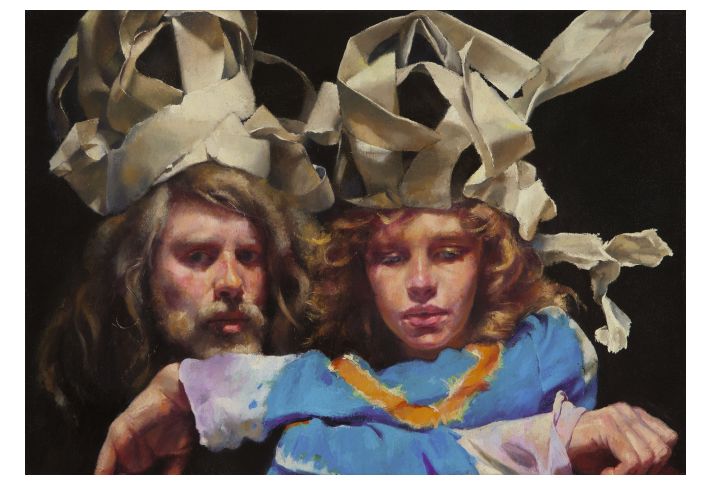 Lenkiewicz charted the course of his relationship with Mary over a period of several years between 1978 and 1981, the idea first occurring to him in 1977 as he prepared the Jealousy Project. Lenkiewicz had principally been interested in the decay of relationships and the withdrawal symptoms generated thereby. With Mary, however, Lenkiewicz set out to "consciously prepare oneself for addiction" and record that experience.

It resulted in a large folio notebook (published in 1998 as The Mary Notebook) and a complete Project titled The Painter with Mary: a Study in Obsessional Behaviour (1981). Lenkiewicz stated that the Project became a crossroads in his work with the understanding that “relationships do not solve the problem of existence”. Indeed for Lenkiewicz it proved that ‘the other person’ was merely a reflection or ‘double’ of oneself and one’s own aesthetic preferences – “he in love with himself; she in love with herself.” The ‘hats’ are Möbius strips – surfaces which have only one side, not two. Follow the surface and you return inevitably to the place you started from.

He developed these ideas of ‘doubles’ and ‘reflection’ in a later Project The Painter with Women: Observations on the Theme of the Double (1994), where he stated: “In all our attractions, sympathies, interests – or so it seems to the painter – the ‘other’ can by physiological necessity (it seems that it must be the case) only ever be a fragmented mirror. The Painter may think he thinks of her, certainly; but he can only feel his feelings and think his thoughts. So he must consider where she came from – where indeed did she really come from? His first response to her was his aesthetic reaction to that alleged a priori. It is clear that she came from him. And he can only embrace himself.”

Note: Listed as No. 47 Self-Portrait with Mary in the 1980 retrospective list.

This painting is in the collection of The Lenkiewicz Foundation.

The Painter With Mary in Newspaper Magi-Fools Hats.
Project: The Painter with Mary: a Study in Obsessional Behaviour
Medium: Oil on canvas
Size: 48 x 69 cm

Mary on the Spanish bed.

Self-Portrait with Mary with Newspaper in Her Hair.

Study on the train from London after Rome.

The claw moves in the stomach as she leaves.

The line of thought manufactures fear.

The Painter dipping his hand into the river of Mary.

The Painter With Mary in Newspaper Magi-Fools Hats.

The Painter with Mary in Piermasters Restaurant Accompanied by The Painter.