As part of the 1979 Project on Old Age, Lenkiewicz compiled a large body of illustrated notes bound into an A3 folio using a simple method of a glued binding in hardboard covers. The cover is formed from the exhibition poster. There are 230 pages in all. The paper material varies between cartridge paper and blank newspaper, with some inserts of short quotations.

The primary source for the notes is The Coming of Age (1970), by Simone de Beauvoir, which had been translated into English in 1972. This work is overshadowed by the far more influential feminist work The Second Sex (1949), and in some scholarly studies of de Beauvoir's work is barely mentioned. Scholars and philosophers tend to view it as lacking consistent method, but de Beauvoir had no precedents to follow in tackling this subject. As Kathleen Woodward explains, "She surveyed and synthesized what she had found in multiple domains, including biology, anthropology, philosophy, and the historical and cultural record, drawing it all together to argue with no holds barred that the elderly are not only marginalized in contemporary capitalist societies, they are dehumanized."

Lenkiewicz placed a premium on what he termed 'cross-referential' scholarship and wholeheartedly concurred with the notion that the elderly were one of the prime examples of people rendered 'invisible' by cultures dominated by a cult of youth and affluence. He thought it ‘humane and brave and an innovative piece of work’ but conceded that ‘nowadays it might be seen as lightweight and sentimental’ (1997). Lenkiewicz used de Beauvoir’s selection of (largely) French intellectuals and historical figures with valuable insights into old age and added illustrations drawn from contemporary portraits or photographs to put a face to the quotations. He also added to the discussion of the ageing experience of famous painters, such as Michelangelo, Goya, Cézanne, and William Blake.

The notes conclude with material on gerontological research and theories, and then explore non-Christian traditions, such as Taoist thoughts on longevity and sexuality. The notes are drawn from work by Alfred Kinsey, Alex Comfort and others. This material was intended to support a lecture on ‘Old Age & Sexuality’, to be delivered to an audience invited by Plymouth Age Concern but which never took place.

To view a slideshow of the notebook click any image. To see a detailed view of individual pages, click the 'Detailed view' links. 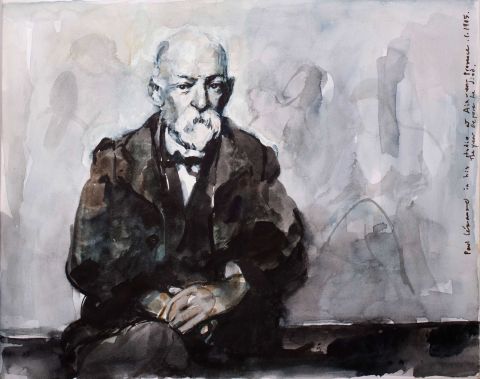