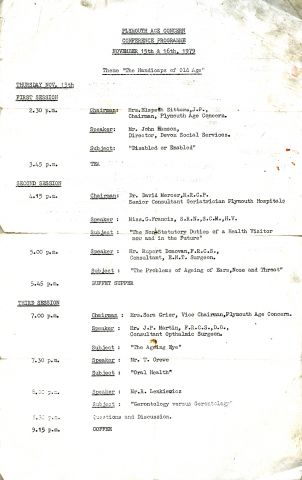 Lenkiewicz was invited to deliver a lecture to the Age Concern audience at Plymouth Medical School and set out to deliver something more thought-provoking than the usual practical topics of health or housing. In November 1979, Plymouth’s elderly community were introduced, therefore, to the elderly Professor Jeremy Jacobson, who tottered onto the stage and delivered a commentary on ‘Geriatrics versus Gerontology’: that is, living well vs. living a long time. He’d compiled an exhaustive compendium of notes and aphorisms by philosophers, saints, artists, writers, musicians, and scientists who spoke of the coming  of old age as nothing short of calamity – a thesis at total variance with the Age Concern ethos of a ‘green old age’. A single quote from Voltaire captures the tone: “The heart does not grow old, but it is sad to dwell amongst ruins.” Of course, Prof. Jacobson was none other than Lenkiewicz himself, expertly disguised with theatrical make-up and props. At the end of his lecture he pulled away his disguise, becoming in a single instant both the most popular and most reviled speaker at such an event.

It was a grand hoax, but the artist’s serious intention was to galvanize his audience, whom he felt had entered into a conspiracy with younger generations to disappear into a quiet ‘cared for’ existence, at the cost of suppressing passions and hopes that burned as bright at 80 as they had at eighteen. In handwritten notes inscribed on the programme advertising his talk, Lenkiewicz wrote: ‘Motivation for quality of life in age only comes from quality of life in the whole life’. He identified the problem in the simple fact that older people were ‘no longer desirable’ -- no longer to anyone’s taste – ‘the old are not taste-commodities’.