The Painter With Women: Observations on the Theme of the Double

The second showing of "sketches and reflections" for Project 18 to be shown at the New Street Gallery.

THE PAINTER WITH WOMEN: OBSERVATIONS ON THE THEME OF THE DOUBLE

“It hath been thought a vast commendation of a painter to say his figures seem to breathe; but surely it is a much greater and nobler applause that they appear to think.”

These studies are introductory enquiries concerning three aspects of perception, 1. the relationship between one person and another, 2. philosophical considerations inspired by the mirror; 3. the “folly of wise men”.

These studies are sketches for project eighteen of the Relationship Series. The large exhibition planned for the summer is on the theme: THE PAINTER WITH WOMEN:- Observations on the theme of the Double. (This eighteenth project in the summer will probably be the last large scale exhibition by Lenkiewicz in the city as he loses his studio in October in order that the handsome Georgian warehouse can be convened into another pub/club/restaurant).

Of the three issues that have preoccupied the painter in this project, the “folly of wise men” formula and the “reflection” formula are significant.

The acclaimed father of Christian Monasticism was St. Antony t he Anchorite or Egypt. His personal struggle and eventual triumph was an epic moral tale of heroic asceticism versus the weakness of the flesh. The traditional metaphor of Lust is ironically presented in these studies with the painter as St. Antony.

It need hardly be emphasised that the painter does not share St. Antony’s motivation. He is however, interested in the thesis that there is no fool like an old fool.

“Reflection does not concern itself with objects themselves with a view to deriving concepts from them directly, but is that state of mind in which we first set ourselves to discover the subjective conditions under which we are able to arrive at concepts.”
IMMANUEL KANT.

The formula of the “Reflection” is complex. Philosophers have been fascinated by it for centuries. From Descartes on we turn away from straight forward consideration of objects towards a consideration of the experience in which objects are given. We thematize the subject of thought itself. Self-reflection marks the human being’s rise to the rank of a subject. In Greek and Latin philosophy the term “Reflection” has optic connotations – the mirror surface throws back light. Unlike the common notion of reflection, reflection as a philosophical concept requires that the action of reproduction also be thrown back upon itself. Where these studies are concerned the reflection formula is a metaphor for thinking.

One’s environment and culture, one’s relationships, one’s passions, one’s deepest and most willed intentions may be nothing more than a broken mirror.

To break a mirror brings bad luck they say, perhaps that is because a broken mirror is the closest we get to our own reality.

“We only have recourse to what is called reflection because knowledge escapes us; forgetfulness is the flight of knowledge, and reflection, by awakening a new memory in the place of the departing one, maintains knowledge in such a manner that it appears to be the same.” 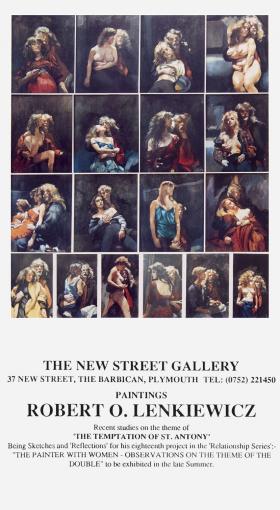