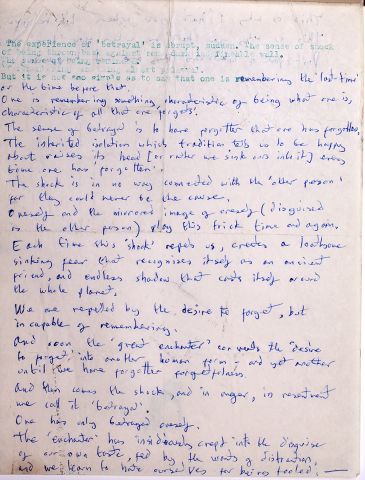 The sense of betrayal is to have forgotten that one has forgotten. The inherited isolation which tradition tells us to be happy about raises its head [or rather we sink ours into it] every time one has ‘forgotten’.

The shock is in no way connected with the ‘other person’ for they could never be the cause. Oneself and the mirrored image of oneself (disguised as the other person) play this trick time and again. Each time this ‘shock’ repels us, creates a loathsome sinking fear that recognises itself as an ancient friend, an endless shadow that casts itself around the whole planet.

We are repelled by the desire to forget, but incapable of remembering. And soon the ‘great enchanter’ converts the ‘desire to forget’ into another human form – and yet another until we have forgotten forgetfulness. And then comes the shock, and in anger, in resentment, we call it ‘betrayal’.

One has only betrayed oneself.

The ‘enchanter’ has insidiously crept into the disguise of our own taste, fed by the wants of distraction, and we learn to hate ourselves for being fooled –