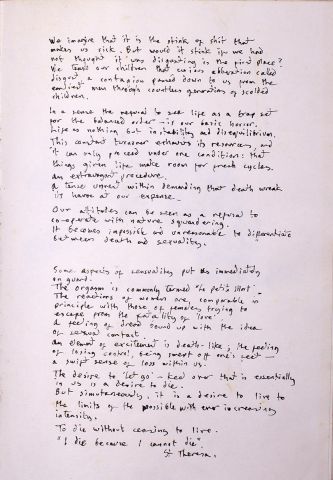 We imagine that it is the stink of shit that makes us sick. But would it stink if we had not thought it disgusting in the first place? We teach our children that curious aberration called disgust, a contagion passed down to us from the earliest men through countless generations of scolded children.

In a sense the refusal to see life as a trap set for the balanced order – is our basic horror. Life as nothing but instability and disequilibrium. This constant turnover exhausts its resources, and it can only proceed under one condition: that things given life make room for fresh cycles.

An extravagant procedure. A tense unrest within demanding that death wreak its havoc at our expense. Our attitudes can be seen as a refusal to co-operate with nature squandering. It becomes impossible and unreasonable to differentiate between death and sexuality.

Some aspects of sensuality put us immediately on guard. The orgasm is commonly termed “Le Petite Mort”. The reactions of women are comparable in principle with those of females trying to escape from the fatality of ‘love’. A feeling of dread bound up with the idea of sexual contact. An element of excitement is death-like; the feeling of losing control, being swept off one’s feet – a swift sense of loss within us. The desire to ‘let go’ – keel over – that is essentially a desire to die. But simultaneously it is a desire to live to the limits of the possible with ever increasing intensity. To die without ceasing to live.

“I die because I cannot die.”