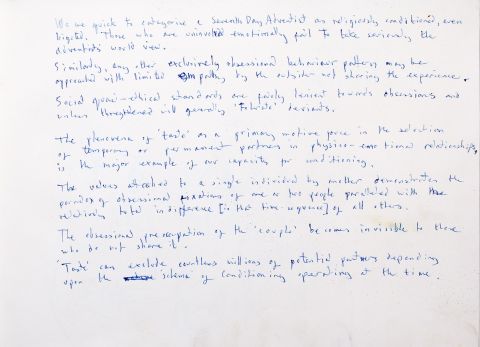 We are quick to categorize a Seventh Day Adventist as religiously conditioned, even bigoted. Those who are uninvolved emotionally fail to take seriously the Adventist’s world view.

Similarly, any other exclusively obsessional behaviour pattern may be approached with limited empathy by the outsider not sharing the experience.

Social quasi-ethical standards are fairly lenient towards obsessions and unless threatened will generally ‘tolerate’ deviants.

The phenomenon of ‘taste’ as a primary motive force in the selection of temporary or permanent partners in physico-emotional relationships, is the major example of our capacity for conditioning.

The values attached to a single individual by another demonstrates the paradox of obsessional fixations of one or two people paralleled with the relatively total indifference [in that time sequence] of all others.

The obsessional preoccupation of the ‘couple’ becomes invisible to those who do not share it.

‘Taste’ can exclude countless millions of potential partners depending upon the ‘schema’ of conditioning operating at the time.