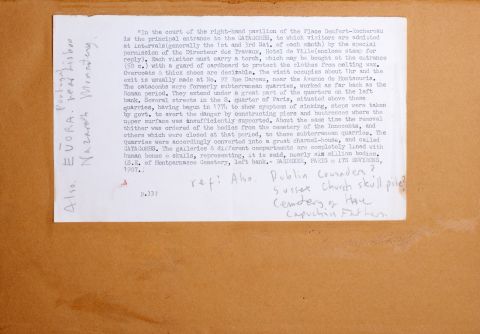 “In the court of the right-hand pavilion of the Place Denfert-Rochereau is the principal entrance to the CATACOMBS, to which visitors are admitted at intervals (generally the 1st and 3rd Sat. of each month) by the special permission of the Directeur des Travaux, Hotel de Ville(enclose stamp for reply). Each visitor must carry a torch, which may be bought at the entrance (50 c.) with a guard of cardboard to protect the clothes from melting wax. Overcoats & thick shoes are desirable. The visit occupies about 1hr and the exit is usually made at No. 92 Rue Dareau, near the Avenue de Montsouris.

The catacombs were formerly subterranean quarries, worked as far back as the Roman period. They extend under a great part of the quarters on the left bank. Several streets in the S. quarter of Paris, situated above these quarries, having begun in 1774 to show symptoms of sinking, steps were taken by govt. to avert the danger by constructing piers and buttresses where the upper surface was insufficiently supported. About the same time the removal thither was ordered of the bodies from the cemetery of the Innocents, and others which were closed at that period, to these subterranean quarries. The quarries were accordingly converted into a great charnel-house, and called CATACOMBS. The galleries & different compartments are completely l.1.ned with human bones & skulls, representing, it is said, nearly six million bodies.” (S.E. of Montparnasse Cemetery, left bank. - BAEDEKER, PARIS & ITS ENVIRONS, 1907). p.337.