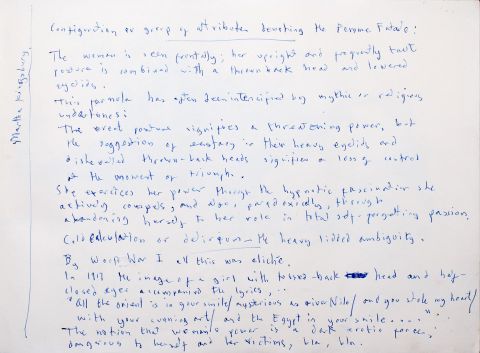 Configuration or group of attributes denoting the Femme Fatale:

The woman is seen frontally; her upright and frequently taut posture is combined with a thrown back head and lowered eyelids.

This formula has often been intensified by mythic or religious undertones.

The erect posture signifies a threatening power, but the suggestion of ecstasy in their heavy eyelids and dishevelled thrown-back heads signifies a loss of control at the moment of triumph.

She experiences her power through the hypnotic fascination she actively compels, and also, paradoxically, trough abandoning herself to her role in total self-forgetting passion.
Cold calculation or delirium – the heavy-lidded ambiguity.

By World War I all this was cliché.

In 1917 the image of a girl with tossed-back head and half-closed eyes accompanied the lyrics: