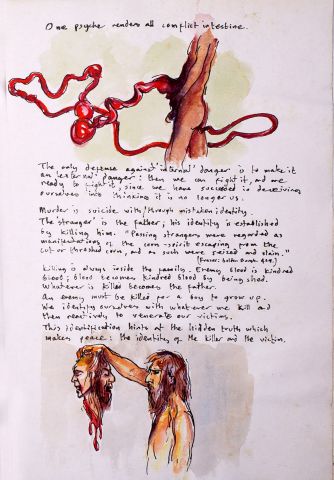 One psyche renders all conflict intestine. [paraphrase of: “There is only one psyche, in relation to which all conflict is endopsychic, all war intestine.” Brown, p.162]

The only defence against an ‘internal’ danger is to make it an external danger: then we can fight it; and are ready to fight it, since we have succeeded in deceiving ourselves into thinking it is no longer us.

… the stranger is the father. … his identity is established by killing him. "Passing strangers were regarded as manifestations of the corn-spirit escaping from the cut or threshed corn, and as such were seized and slain."