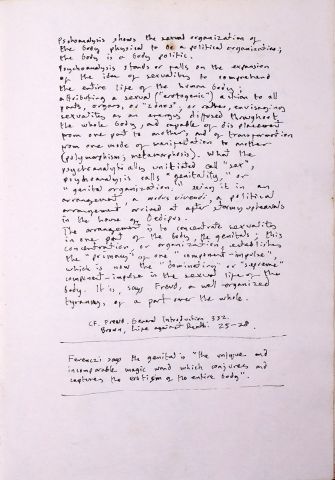 Psychoanalysis shows the sexual organization of the body physical to be a political organization; the body is a body politic. Psychoanalysis stands or falls on the expansion of the idea of sexuality to comprehend the entire life of the human body; attributing a sexual (“erotogenic”) action to all parts, organs, or "zones"; or rather, envisaging sexuality as an energy diffused throughout the whole body, and capable of displacement from one part to another, and of transformation from one mode of manifestation to an­other ( polymorphism; metamorphosis). What the psycho­analytically uninitiated call "sex”, psychoanalysis calls "genitality”, or "genital organization”, seeing in it an arrangement, a modus vivendi, a political arrangement ar­rived at after stormy upheavals in the house of Oedipus. The arrangement is to concentrate sexuality in one part of the body, the genital; this concentration, or organization, establishes the "primacy" of one "component-im­pulse," which is now the "dominating" or "supreme" component-impulse in the sexual life of the body. It is, says Freud, a well-organized tyranny, of a part over the whole.

Ferenczi says the genital is "the unique and incomparable magic wand which conjures and captures the erotism of the entire body."