In November 1979 Lenkiewicz was invited to present a lecture to the Age Concern audience at Plymouth Medical School and set out to deliver something more thought provoking than the usual practical topics of health or housing.

The audience was introduced, therefore, to the elderly Professor Jeremy Jacobson, who tottered onto the stage and delivered a commentary on ‘Geriatrics versus Gerontology’: that is, living well vs. living a long time. The professor also informed his audience that the consensus view of the wise and the learned throughout history was that the coming of old age was nothing short of calamity. As Voltaire wrote: ‘The heart does not grow old, but it is sad to dwell amongst ruins.’

Of course, Prof. Jacobson was none other than Lenkiewicz himself, expertly disguised with theatrical make-up obtained by Eliza Massey (her items list reads: pancake make-up, chalk, grey hair grips, wax candles, oil for hair). At the end of his lecture he pulled away his disguise, becoming in a single instant both the most popular and most reviled speaker ever at such an event.

The artist’s serious point was that society would inevitably find itself with an unprecedented abundance, if not an unwelcome surplus, of old age as demographics, medical progress and gerontological research drove up human life-spans. The artist felt that the elderly entered into a conspiracy with younger generations to disappear into a quiet ‘cared for’ existence, at the cost of suppressing passions and hopes that burned as bright at 80 as they had at eighteen. In handwritten notes inscribed on the programme advertising his talk, Lenkiewicz wrote: ‘Motivation for quality of life in age only comes from quality of life in the whole life’. He identified the problem in the simple fact that older people were ‘no longer desirable’ -- no longer to anyone’s taste – ‘the old are not taste-commodities’.

In his portraits of elderly people, Lenkiewicz aimed to capture the plain fact of their existence, to remind visitors to his exhibition that one day, inescapably, everyone would face the coming of age. But the project’s more overt message was that ‘It is not that we do not ‘care’ for the aged, it is that do not care at any stage of our lives.’ This was, for Lenkiewicz, the deficiency at the heart of our education for life, which he explored at greater length in the 1987 Education Project.

A few of Robert Lenkiewicz's remarks are reproduced below (see page scans for full text).

At 15 there is the all-absorbing stress of the class bully or the faithless girlfriend. At 30 it may be the stress of alcoholism or creative impulses or the rates bill. At 60 the all-embracing stress is OLD AGE.

At 15 there is no hesitation in the desire to thrash the bully or replace the girlfriend – at 30 no hesitation in leading the bailiff a merry dance. We do not question the natural impulse to change what is undesirable into something desirable.

Old age is undesirable – we live in a youth infatuated world. We learn palliative techniques which can soften the edges of age – and in a final charge at the ranks of pleasure try and compromise and adjust in the shade of the eccentric tree of wisdom. It doesn’t work.

Old age has for centuries been the last but one God in our lives – we have believed in him for a long time. He has been worshipped resentfully; we have accepted him with an angry but resigned heart. The time is coming when we will lose faith in him; we will no longer believe in his authority. It is not unreasonable to visualise a time when he will be just another dead god.

But there is a second date before our death, roughly 20 years earlier when we shall be alive, but not fully. Age is a condition from which we will all suffer. Ageing is impairment: it is the progressive dissolution of what we have built up through our lives. We deal with that by talking about something else or by talking about the compensations of age. As Professor Alex Comfort once said: ‘One doesn’t ask for compensation, unless one has been run over’.

An open-eyed visit to an old folks home or hospital ward soon makes one lose patience with those who philosophize about the beauty of a green old age. Ageing is loss; it is not ripening.

St Beauve wrote: ‘If this deterioration is really inevitable, then we’d better accept it with dignity, or we shall increase our misery.’

But the evidence suggests that in due course it will probably not be inevitable, and we live in a generation where we may see the sign of this intolerable and diminishing change pushed back. And people should know this – they should be told that science will suppress causes of premature death and postpone the ageing process.

There is active research on ageing, the effect of which will postpone changes, roughly in step, across the board – everything from tumours to pedestrian road accidents (which are highly age-related), would occur at later ages. There is a good chance of postponing all of the ageing causes. What is important to realise is that the period of senility would not be prolonged; in other words, you would become older later, you would not be old for longer. To prolong quality of life so that it takes 80 years to get to be 60.

Ageing research is going to get funded whether we like it or not. Those who are responsible for financing projects are usually elderly – they are likely to sympathise. We always fund things that seem like magic. A project that establishes power and authority over something or someone always gets funded. Institutional psychopathy (like some politicians and spiritual leaders) usually get their way. The only projects that run a close second for success are miracle-type ones.

The delay of ageing will be very popular; it will bring profound social changes. Some of them might even seem constructive. After all, if we live longer better we will have a greater stake in respecting our own skins.

Old people have to contend with natural senescence, inflation, poor social attention and endless forms of obsolescence. We should remember, in our society ‘achievement’ is always in the future. The old know only too well – past achievement doesn’t score. Everything is forgettable.”  (Lenkiewicz, 1979). 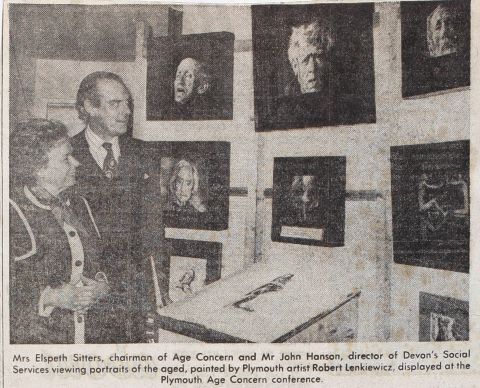